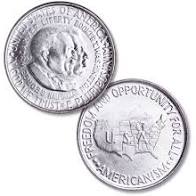 In prior posts I have presented a few basics about the Booker T. Washington and George Washington Carver Commemorative coin and it’s designer Issac Scott Hathaway. But this post will look at some of the controversy I have learned about.

I have learned that :

Take time to read more information about some of these facts by clicking the links below.

But when you finish reading come back and share your thoughts