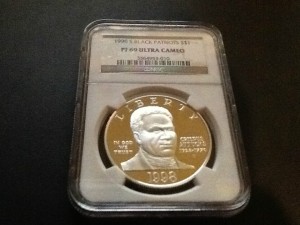 When most people think of the men who fought for the United States’ freedom, many are unaware  that the first patriot to die was an African American man named Crispus Attucks. He was killed by the British in the Boston Massacre of 1770.

Many may not also know that more than 5,000 African Americans fought in the Revolutionary War. In Virginia, dozens froze, starved and died; the 1st Rhode Island Regiment was made up entirely of 250 African Americans. There was one instance where the British General Cornwallis was completely fooled by double agent James Armistead, the African American man who stood by General Lafayette’s side when Cornwallis surrendered at Yorktown.

The obverse shows a portrait of Crispus Attucks and was designed by US Mint designer John Merchanti. The reverse was designed by Ed Dwight. It shows a Black Patriot family. I will be doing a separate post on him.  The reverse shows the proposed Black Patriots Memorial. Note that I said “proposed”. Since 1998 this is still a working idea that needs to be approved for implementation. Read a current article about the proposed Black Patriots Memorial. A portion of the sale of these coins are supposed to go toward the Memorial.